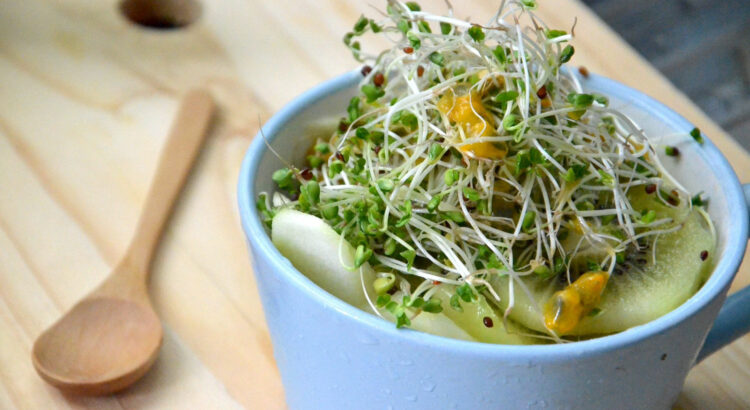 Prostate cancer (PC) is a disease typical for old age, though anomalies in the prostate tissue can be observed in men in their twenties or thirties. Therefore, PC is believed to be slow-growing cancer. The long, relatively silent period of prostate cancer suggests that different types of therapies could potentially slow disease progression or stop disease onset, which could help to avoid or decrease invasive surgical procedures such as prostatectomy.

In the previous posts, we discussed various food ingredients such as Lycopene in tomatoes, Polyacetylenic oxylipins in carrots, Vitamin K2 in sauerkraut, and natto that have proven anti-cancer activities. Here we will address the cancer-healing properties of one more magic gift of nature – broccoli.

Broccoli, as well as Brussels sprouts, cauliflower, and cabbage, are cruciferous vegetables. Cruciferous vegetable intake is related to the decreased risk of prostate cancer (Liu B. et al. 2012), and lower risks of heart disease and diabetes. This association is mostly attributed to isothiocyanates-sulfur-containing phytochemicals abundant in cruciferous vegetables, particularly in broccoli and sprouts.

In a large study of 3,237 men, Kolonel et al.(2000, ) observed a 39% decline in prostate cancer risk between men consuming the highest and lowest amounts of cruciferous vegetables.

In another study, Cohen et al. (2000) reported that increasing cruciferous vegetable intake from one serving to more than three servings per week was linked with a 41% decrease in risk for prostate cancer.

Sulforaphane (SFN) is an isothiocyanate that forms upon chopping or chewing fresh cruciferous vegetables. When the plant is eaten, the enzyme myrosinase, released from the plant and present in our gut, converts glucoraphanin to SFN. This conversion may depend on gut microflora, which once again demonstrates the importance of digestive health in the prevention of chronic diseases, including cancer.
Previous studies showed that SFN derived from broccoli might prevent prostate cancer development and progression by blocking damage caused by carcinogens.

Most of the cancer healing evidence of SFN has been obtained in animal models. The study by Beaver LM et al. (2017) used transgenic mice that had been introduced to a specific gene, SV40. This gene turns on at sexual maturity between 8 and 10 weeks of age and causes cancer lesions seen at 12 weeks of age. Following this, by 28 weeks, adenocarcinomas and metastasis can occur.
The experimental animals were fed with a 15% broccoli sprout diet which is equal to 1 mg SFN/d which has been used previously in similar studies. The main results of the research may be summarized as follows:

The authors of the research concluded: “Importantly, consumption of a diet high in broccoli sprouts significantly reduced the incidence of invasive prostate cancer by 11- and 2.4-fold, at the 12- and 28-wk time points, respectively”.

Although in rodents, these results best demonstrate the anti-cancer properties of broccoli. Of course, animal results cannot be transferred to humans directly. Therefore, in the scientific literature, one can find reports on the no effect of sulforaphane on the development of human prostate cancer. Differences in physiology and immune responses due to different life expectancies between humans and model animals can play a critical role, which may require adjustment of doses and duration of treatment.

In a double-blinded, randomized, placebo-controlled trial by B.G. Cipolla and colleagues (2015), 78 patients with biochemical recurrence received 60 mg of a stabilized sulforaphane daily for six months. SFN treatment resulted in a much longer PSA doubling time compared to control. It was 86% longer in the sulforaphane than in the placebo group (28.9 and 15.5 months, respectively).

One more trial reported similar results, where 20 patients with recurrent prostate cancer were treated with 200μmoles/day (35,5 mg) of sulforaphane-rich extracts for 20 weeks (Alumkal JJ et al. 2015). In this study, PSA levels decreased in 8 patients, in one of them, more than 50%, and PSA doubling time increased from 6.1 months (pre-treatment) to 9.6 months (on-treatment).

Other health benefits of sulforaphane.

Both in human and animal studies, SFN showed beneficial effects in the alleviation of type 2 diabetes. Consuming broccoli sprout extract (150 µmol of SFN daily for 12 weeks) resulted in a 6.5% decrease in fasting blood sugar levels (Axelsson AS et al. 2017).

There is also scientific evidence for the therapeutic effects of SFN on damaged brain and protection of skin injured by sun UV.

Can we get sulforaphane from the cooked broccoli?

The short answer is “Yes, we can.” Sulforaphane is a toxic byproduct that forms in the plant in response to damage, a kind of defensive reaction of the plant to a threat to its life from insects or other herbivores. For such a reaction to take place, need two compounds: glucoraphanin – otherwise a harmless substance and myrosinase-enzyme, which support the reaction.

Although myrosinase, like many other protein structures, denatures at high temperatures and loses its activity when cooked, there has been increasing evidence that gut microbiota is capable of catalyzing the same reaction. Here, once again, the gut microbiota helps us out by increasing the bioavailability of phytochemicals. Research showed that mechanical cleansing or antibiotic treatment greatly reduces SFN production in healthy people (Shapiro T.A. 1998). The other way to boost the SFN conversion is to dress your salads in mustard. Mustard is rich in myrosinase, which can help increase the availability of SFN, particularly in cooked vegetables.

See also  A Pesco-Mediterranean diet with intermittent fasting: an ideal diet for health and longevity

As to glucosinolates (glucoraphanin), cooking by steaming and stir-fry did not cause any notable loss of glucosinolates, whereas boiling showed significant losses by leaching (about 90% of glucosinolates) into the cooking water. So, avoid boiling if you want to achieve increased bioavailability and preserve the essential health benefits of broccoli. It is best to cook vegetables below 284˚F (140˚C) for 1-3 minutes.
Storage at room temperature for seven days resulted in a minor loss (9-26%) of glucosinolate levels, whereas the plants shredded finely showed a significant decline of glucosinolate levels with post-shredding dwell time – up to 75% over six h (Song L, Thornalley PJ. 2007).

Safety and recommended doses of sulforaphane.

You should bear in mind that SFN is primarily a chemical substance of the plant’s defense reaction to physical damage, and its health benefits for humans are kind of side effects.

Isothiocyanates (Sulforaphane) have been known to prevent iodine uptake in the thyroid, causing goiters. High levels of SFN may also cause hepatotoxicity or liver damage. However, consuming SFN in amounts found in cruciferous vegetables is considered safe, though Chu M and Seltzer TF (2010) reported a case when a woman who consumed more than a kilogram of bok choy (a type of Chinese cabbage) daily developed severe hypothyroidism due to excessive ingestion of myrosinase.

The SFN supplements available on the market though produced from broccoli or broccoli sprout extract, commonly contain more SFN than what’s naturally found in food.

There are no recommended doses of SFN for humans that could be used safely as preventative or disease treatment doses. No maximally effective doses have been established for SFN.

Socala et al. (2019) tested the toxicity of sulforaphane in mice after intraperitoneal injection of single doses and found the LD50 value of SFN to be 213 mg/kg i.p. (1203 µmol/kg). This amount is about 10-fold higher than the median dose reported as effective in mice.
The median effective dose of sulforaphane in the published literature by oral administration is 175 µmol/kg body weight (Yagishita Y et al. 2019), which is equal to 31 mg/kg. But this is true for rodents; what about humans? In this regard, you can find a wide variety of viewpoints ranging from 0.4 mg/day (Healthline website) to 35 mg – 250 mg and so on.

One cup (91 G) of broccoli sprouts contains 227.5 mg of SFN, although amounts can differ depending on the sprouting process, soils, and the type of seed used. The use of commercial supplements is full of dangers since there are many poor supplements and many dishonest supplement providers.

Given observed efficacy in humans at doses <0.5 µmol/kg (Yagishita Y et al. 2019) (about 90 mcg/kg) of SFN, and the toxicity data in rodents, and only a 10-fold difference in the safety margin, one should be very careful as to doses, schedule, and duration of SFN treatment.

If you notice that I have missed something important or provided out-of-date information, please let me know in the comments; the information will be updated constantly. Also, I will be grateful if you share your experience with blog readers.

A Pesco-Mediterranean diet with intermittent fasting: an ideal diet for health and longevity