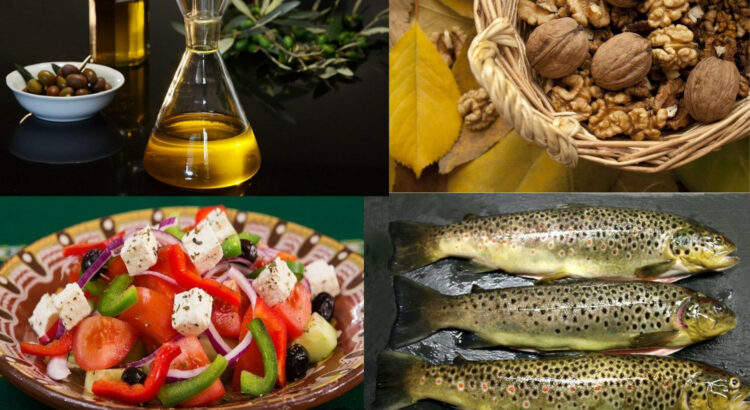 Diet is one of the pillars determining a person’s health, particularly heart health. For the last three years, 25 leading American experts have ranked the Pesco-Mediterranean diet as the #1 among 35 other diets for overall health in terms of nutrition, safety, easiness to follow, effectiveness for weight loss, protection against cardiovascular disease, and diabetes. American Dietary Guidelines and American College of Cardiology/American Heart Association endorsed the traditional Mediterranean diet as the best diet for human health and longevity.

How did the Pesco-Mediterranean diet deserve such accolades?

– Reduces the incidence of myocardial infarction by 29% and stroke – by 42%;

– Reduces the risk of myocardial infarction recurrence by 73%;

– Lowers the risk of mortality from coronary artery disease by 34%;

– Improves quality of life and longevity.

Is the Mediterranean diet a decent diet to follow?

Tens of different diets may have been approved for certain health conditions, nevertheless, have various limitations to recommending them as fully satisfying human needs in nutrition on one hand and keeping up his health for his life on the other hand.

We humans have evolved as omnivorous creatures, as shown by the anatomy and physiology of our digestive system. Therefore, any artificial restrictions on food sources may have negative health outcomes. The so-called Western diet based predominantly on meat and animal products is rapidly spreading all over the world. The prevalence of concomitant diseases of this diet, such as cardiovascular disease (CVD), diabetes, gastrointestinal cancers, and obesity are also rocketing. Various vegetarian diets have been adopted as an alternative to the Western diet and to cut the risk of CVD and cancer. However, diets excluding animal-based food can result in some nutrient deficiencies such as vitamin B12, high-quality proteins, iron, zinc, omega-three fatty acids (u3FA), vitamin D, and calcium. Studies suggest that strict veganism raises the risk for bone fractures and loss of muscle tissues.

Is the Mediterranean diet the only decent to follow to ensure you have a nutritious diet and good health? Yes, it is. Many epidemiological studies and randomized clinical trials show that the Mediterranean diet is related to lower risks for all-cause and CVD mortality, coronary heart disease, metabolic syndrome, diabetes, cognitive decline, Alzheimer’s disease, depression, overall cancer mortality, and breast and colorectal cancers.

So, most naturally, without the use of drugs and surgery, the Mediterranean diet can cut the dire outcomes of the quiet pandemic of our time –the food revolution.

Over the past three years, we all have witnessed a terrible viral pandemic that has claimed millions of lives. Although it is still raging in some countries, effective vaccines have already been created to stop the pandemic’s further spread. Scientists, governments, and ordinary people have mobilized to confront the pandemic.

One can make an analogy between the COVID-19 vaccine and the Pesco-Mediterranean diet; this diet is indeed a life-saving vaccine that can prevent millions of premature deaths, improve the quality of life, and release so much creative energy. So, we can exclaim “Eureka” and advertise it wherever we can. Unfortunately, this is not happening. Do your part to protect your family, loved ones, and friends, and help to spread the word about the best eating style in the world in your circles.

Seafood is the key part of the Pesco-Mediterranean diet. The Dietary Guidelines for Americans recommend including at least two fish/seafood meals a week, totaling at least 8 to 10 oz/week ((Millen B.et. al., 2015).

In a Greece study of 22,043 participants (Trichopoulou A. et al. (2003)) a higher level of adherence to the Mediterranean diet correlated with a 25% decrease in total mortality and a 33% of cut in death due to CHD.

The PREDIMED was a randomized clinical trial conducted in Spain on elderly people at high risk but with no CVD at enrollment. The study tested three diets:

During the 4.8-year study, the first and the second groups showed significant cuts of 29% for myocardial infarction, stroke, and death from these conditions and 42% for stroke.

The Lyon Diet Heart study was another randomized clinical trial that tested if a Mediterranean diet may prevent recurrences after a first myocardial infarction (MI). Six hundred five survivors of a first MI were randomly distributed into either a control or a Mediterranean group. The Mediterranean diet group observed an impressive 73% reduction in the risk of new MI.

An analysis of 5 dietary studies of coronary artery disease (CAD) mortality among vegetarians and meat-eaters found:  Compared with nonvegetarians, CAD mortality was

In the Oxford study, which included 48,188 participants with 18 years of follow-up, the rate of CAD was much lower among vegetarians and pescatarians compared with meat-eaters (Tong TYN et al. 2019). The study observed an interesting fact that vegetarians, but not pescatarians, had significantly higher rates of hemorrhagic strokes and total strokes compared with meat-eaters.

The components of the Pesco-Mediterranean diet.

Recent reviews, including more than 130 000 individuals, showed that fish/seafood eating during pregnancy was connected with benefits to brain development in offspring that became significant at 4 oz/week and increased from there. There were no adverse effects even when the amount of fish/seafood consumption exceeded 100 oz/week (Hibbeln JR et al. 2019).

When choosing fish, it is prudent to pick low-mercury fish, such as salmon, sardines, trout, herring, and anchovies. All of them are high in u-3FA, and scallops, shrimp, lobster, oysters, and clams, are also low in mercury. Upon cooking, use lower temperatures until flesh is opaque; avoid charring or burning fish/seafood, which can cause carcinogenic compounds.

The presence of polyphenols in the oil is felt by a tingling or burning sensation in the back of the throat a few seconds following after swallowing olive oil.

Along with vinegar, plentiful use of EVOO for dressing salads and vegetable dishes is encouraged. It is also recommended to simmer minced tomatoes, garlic, onions, and aromatic herbs as a sauce for vegetables, pasta, rice, fish, or legumes.

Dairy products and eggs are also included in the Pesco- Mediterranean diet as important sources of high-quality protein, minerals, probiotics, and vitamin D. Preference is given to fermented dairy products such as yogurt, kefir, and soft cheeses; butter and hard cheese are not recommended, as they are rich in saturated fats and salt.

Eggs as a superfood include high-quality nutrients in the most bioavailable form: all essential amino acids, vitamins: A, D, B2, B12, niacin, minerals: selenium, iodine, phosphorus, zinc, and carotenoids: lutein, zeaxanthin. While some recent research suggests that egg consumption is not associated with blood cholesterol levels, it should be borne in mind that each yolk contains about 184 mg of cholesterol. The Pesco-Mediterranean diet recommends no more than five yolks a week, and egg whites can be consumed without limit.

Nut consumption is correlated with reduced mortality rates from both CVD and CAD, as well as decreased risks of diabetes. One daily serving of mixed nuts resulted in a 28% reduction in CVD risk.

Reasonable consumption of nuts does not promote weight gain.

Legumes also play a central role in the traditional Mediterranean diet. Legumes are an invaluable source of fiber, vegetable protein, folate, polyphenols, and magnesium. Legumes eating can reduce the risk of incident and fatal CVD and CAD, as well as improvements in blood glucose, cholesterol, blood pressure, and body weight.

An indispensable part of the Mediterranean diet is whole grains, such as barley, whole oats, rye, corn, buckwheat, brown rice, and quinoa.

Homemade pizza, pasta, or mixed rice dishes are authentic and healthy Mediterranean foods. Pasta, despite being a refined carbohydrate, has a low glycemic index. According to a recent study, pasta may even help decrease body weight (Chiavaroli L et al. 2018).

White rice, like pasta, is usually cooked with a sauce including EVOO, tomatoes, other vegetables, and aromatic herbs, thereby adding beneficial nutrients and bio-actives to these starchy but nutritive foods that are likely to lower their glycemic index further.

The primary beverage of the Mediterranean diet is unsweetened water. Tea and coffee are noncaloric and rich in antioxidants, particularly polyphenols, and are associated with improved CVD issues.

For alcohol lovers, the Pesco-Mediterranean diet recommends dry red wine, no more than a single glass (#6 oz or 170 ml) for women and 1 or 2 glasses/day for men (6 to 12 oz or no more than 340ml) consumed with meals.

Servings shown in the table below are for a person of average weight and height. Obviously, they cannot be the same for a person weighing 70 kg and 120 kg. or a person employed in intensive physical labor and an office worker. The portions are always easy to adjust for yourself, proportionally changing the constituent parts.

Intermittent fasting is an integral part of the Pesco-Mediterranean diet.

Intermittent fasting is the practice of eating where the entire daily food intake is restricted to a specific time frame, usually 6 to 12 hours.

This is a daily eating culture for a lifetime, rather than a course with a specific duration, and it is not compatible with routinely eating three large meals plus snacks every day.

Intermittent fasting reduces intra-abdominal fat, the most dangerous adipose tissue for prostate health.  Evidence is growing that eating for 6 hours and fasting for 18 hours can switch cellular metabolism from glucose-based to ketone-based energy, with increased stress resistance and longevity, reduced inflammation, and a decreased rate of illnesses, including cancer, diabetes, CVD, neurodegenerative diseases, and obesity (de Cabo R ey al. 2019).

The most prevalent form of intermittent eating involves a 16:8 fasting to eating ratio and includes two rather than three meals a day. So, although you have two not restricted calories meals, the overall amount of consumed food during a day is reduced by 15 to 60 percent, which may help to stabilize your body weight. If you do not have any contraindications or preferences, the easiest way is to deny breakfast. After a 12-hs overnight fast, the body starts using fats from adipose cells to burn as metabolic fuel instead of glucose in the morning. This improves insulin sensitivity. Fasting does appear to lower blood pressure and resting heart rate and enhance cardiovascular health even in nonobese people.

Today we are proud to live in a free country where everyone is free to choose their lifestyle, including the style of eating. Just think, do we voluntarily choose to eat the food that causes so much trouble: one in two men and one in three women is diagnosed with cancer, cardiovascular diseases kill 655,000 Americans every year, and a third of the population is obese. It is estimated that one-third of all cancer deaths in the United States could be prevented through dietary change.
We must show everywhere that there is another choice, and the results of comparative studies of different diets should not be published only in scientific journals but also intelligibly reach the general public at every step. Then consciousness will change, and after it, the need to eat wholesome, healthy food, which gives joy and longevity.

The Pesco- Mediterranean diet with daily fasting for 16 hs and accent on eating fish and seafood as the principal sources of animal protein is proposed as an ideal diet for health and longevity.

The post was based on the findings published in the Journal of the American College of Cardiology in 2020 (James H. O’Keefe et al. 2020).

2 thoughts to “A Pesco-Mediterranean diet with intermittent fasting: an ideal diet for health and longevity”